Invest Yourself For a Better Retirement™

What you need to know about Retirement Income Planning

The components of any retirement income strategy created by Nestor include:

Cash  - The amount of cash held in the portfolio at any time is equal to the amount needed to cover any excess of spending (including basic spending, discretionary spending, and annuity purchases) over income (including annuity income and other existing sources of income) that is anticipated over the next year.

The Role of Cash in the portfolio – The intention is to park an amount into cash at the beginning of each year of retirement so that your cash, plus income received during the year, will be sufficient to meet that year’s spending.

TIPs – The amount of TIPs held in the portfolio at any time is equal to the reserve savings requirement you specify, plus the amount needed to cover any excess of spending (including basic spending, discretionary spending, and annuity purchases) over income (including annuity income and other existing sources of income) that you anticipate for the 4-year period immediately following the current year.

The Role of TIPs in your portfolio - TIPs serve as an inflation hedge against income needs over the four-year period immediately following the current year that are not otherwise provided for by annuity income or other income sources.  Historical data suggests that inflation risk tends to be a short-term risk in most portfolios because inflation-adjusted returns on stocks tend to be over longer periods.  We therefore use TIPs to protect against inflation risk over this near-term inflation risk. 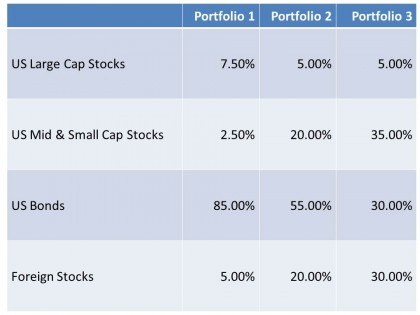 There is a fourth Growth Portfolio which is only used when all of the following three apply: (a) the most aggressive of the three portfolios is used (b) you indicate that you will increase the risk of your investment portfolio in a bad scenario and (c) at some point during the “shock drop” scenario the model expects to have savings that are less than 90% of the Glidepath.  In this situation, the model will shift the portfolio out of the aggressive mix and move it into a fourth, even more aggressive portfolio.  This fourth growth portfolio is as follows:

Role of the Growth Portfolio – the Growth Portfolio is intended to provide for income needs more than five years in the future that are not otherwise provided by annuity income or other income sources.  Historical data suggests that inflation adjusted returns tend to be positive over longer time horizons.

Fixed Immediate Annuities/Longevity Insurance   Nestor will either use fixed immediate annuities or longevity insurance; it will not use both.  Nestor selects which one to use by estimating the net cost of each and choosing the one with the lowest expected net cost.  This is calculated by applying the fixed annual amount toward purchasing fixed immediate annuities or longevity insurance, so that the expected total amount of income purchases to age 86 equals the sum of basic and discretionary spending at age 86.  Nestor stops purchasing annuities at age 85 because this is the maximum issue age for many life insurance companies.

The Role of Fixed Immediate Annuities/Longevity Insurance – The intent is to fully fund basic and discretionary spending at age 86  with a higher degree of certainty for the remainder of your lifetime.

The Role of Variable Immediate Annuities – The intent is to use the growth opportunity that variable immediate annuities provide through participation in market returns to allow income to keep pace with inflation in the later years of retirement.

The following illustration summarizes the conceptual framework for the annuity purchases: 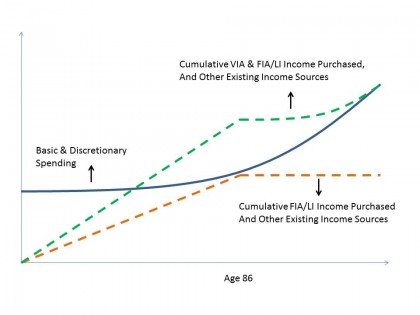 The orange line represents the sum of other existing income sources and cumulative amount of fixed immediate annuity (“FIA”) or longevity insurance (“LI”) purchased.  Note that at age 86 (when annuity purchases stop) the cumulative income from these sources exactly equals the amount of basic and discretionary spending.

The green line is equal to the orange line plus the cumulative amount of income purchased under the variable immediate annuity (“VIA”).  Note that the VIA income continues to increase after age 86, due to market returns – this feature makes VIAs attractive to provide for inflation in the later years of retirement.  Also note that the green line touches the maximum point on the basic and discretionary spending curve, indicating that the total amount of income from annuities and other existing income sources is sufficient to provide for these expenditures.

Click here to see the assumptions used by Nestor

Click here for more information on the “shock drop” scenario

Click here for information on margins of safety and Nestor

Click here to see the your inputs that Nestor will need.

Click here to see the limitations of Nestor’s analysis